We begin to publish the most sensational for the last time book "Another Russia" by Edward Limonov, some chapters. A few words about the book. It was written in prison as the course of lectures for national-bolsheviks. The first circulation of the book that should be let out by the publishing house "Amfora" was confiscated by the FSB without any exclamations. The Publisher's was frightened of such the Special Branch's behavior and refused to print that book. Many other publishing houses followed the advise diven by the FSB and refused too. And only the publisher's "Ultra.Culture" dared and has recently published that authority-hated book.
Lecture 14
In 1988, during the writing of the book "Disciplinary Sanatorium", I immersed myself in excerpts and dictionaries. I remember in the French dictionary "Petit Robert" I was struck by the definition of capitalism: "Social system in which the means of production, plants and factories belong to private individuals", calmly told me the dictionary. It gave the impression that the definition belonged to Mr. Karl Marx. Since it is truly known that Marx wrote some articles for the "Encyclopedia Britannica". I looked into some others dictionaries and encyclopedias. And everywhere, to my surprise, the definitions of capitalism were given in Marxism terminology. It turned out that for capitalism to see itself it had to look in the mirror of Marxism. There is no other mirror.
( Collapse )

As long ago as in 1994 I formulated the results of domestic political battles of 1986 - 1993 as: " Functionaries have won the struggle of the democrats against the communists".

The position has seemed not been changed. Anpilov and his senior lecturers from the HPS had been masked into common people were going to hold up to shame the "dermokratov". Democratic old women were still indignant against the "red - browns" at their DVR (Democratic Choice of Russia) meetings. But at Eltsin's throne obliging, impassive professionals of the authority - bureaucrats began to appear. 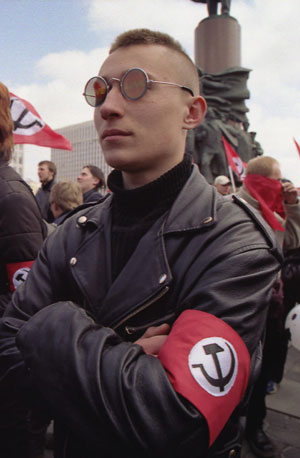 The KPRF, the RKRP, the pretty much thinned-out Anpilov supporters and the smaller orthodox “communist” organizations and even the “terrorist” Gubkin and the RKSM (Bilevsky’s) still consider the “proletariat”, “the working people”, as they say, as a revolutionary class. They are looking on “Marxism-Leninism” as Jews on the Covenant tables brought to them by Moses. The “communists” are wrong. For some reason they suppose that the poor are necessarily violent. In Marx’s times the proletariat was in fact in terrible conditions, they were indeed working 12 hours a day. Yes, they were living in moist and frozen lodgings. So emotionally they were on the most extreme, at any moment ready to hysterical protest and burst, society brink. Their life was so bad that even a torture chamber was not too terrible for them compared to a factory. In a sense, they really had nothing to lose besides shackles. They were the most inveterate, after the convicts maybe. It is in this sense that they were revolutionary. That is, in case of disorders organized by others it was possible to hope on the participation of these inveterate factory workers. Because of their hard life they could be easily excited and easily fell for panic and rebellion emotions.

However, even already a half century after the publication of the “Communist Manifesto” by 1900, workers, even in Russia were not living so desperately. They simply lived steadily bad. As for the revolution’s organization, or its preparation, then the proletariat added to Lenin’s strong cohort of narodovoltzi [People’s Will members] and SRs [Socialist-Revolutionists] not more but even less than other classes. Perovskaia, Kibalchich, Grinevitsky, Alexandre Ulianov, as it is known, were not workers. Totally accidentally in Lefortovo’s castle library happened to be a very instructive research of R. A. Gorodnitsky “The Fighting Organization of the Socialist-Revolutionary Party in 1901-1911”. And there I discovered rare and amazing data about the origin of SRs fighters.( Collapse )
Collapse